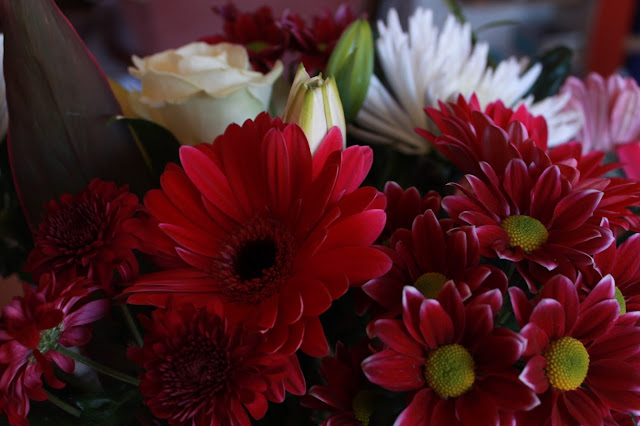 Over the New Year, which we always spend with the same friends, Alice was introduced to gymnastics, through one of the older girls.  Since then she has mentioned several times that she would like to go to a class.  She has often asked to do things once, maybe twice and then never mentioned them again and when I ask she doesn't like that idea anymore.  Gymnastics seemed to have a different kind of hold on her, she didn't stop asking about it.  It has taken a while, lots of answerphone tennis, but finally she is in a class.  It is now the start of our weekend.

There are many questions that I regularly get asked by those interested in or intrigued by home education, one is about what time my children get up in the morning.  My answer always surprises people.  I think that they must be surprised, as they are comparing with their own lives, with their own children, and also because I often tell people that our lives are probably like their weekends (if they have children that is).  But it is often the case that school children (over a certain age) don't particularly like to get up early.  So I have met with a few raised eyebrows when I tell people that Alice has gymnastics at 9.30am on a Saturday morning.  There are two classes for her age group, the 9.30 is the the first and the quietest, worth getting up for I would say.  She is absolutely loving it and it gives me an uninterrupted hour of knitting.

We followed the this weeks class with a visit to her best friends house to pick her up.  I returned home with two very excited girls in the back of the car, they had until 5 o'clock to play.  I love that Alice has found such a wonderful friend, one that she gets on so well with they are totally on the same wavelength sorting out their differences in a gentle and thoughtful way.  I could listen to them playing together for hours.  We arrived home to find that Cameron had gone out to a friends for lunch and a walk so very unusually for me I was in a mostly female house!

I woke on Sunday to a pot of tea, breakfast in bed, a beautiful bunch of flowers and two wonderful handmade cards.  It was Mothers Day in the UK.  Cameron had organised it all, asking his Dad to buy some flowers, helping Alice to make a card (I still haven't worked out when) and making my tea and breakfast on the morning itself.  Cameron has really changed over the last few months, he has become the most thoughtful child.  I don't like it when people describe children as selfish, as to me that kind of behaviour is intentional and young children don't possess those skills.  I spent the day sewing (in between making meals), making a present for a friend's son and the beginnings of something for myself.

A wonderful family weekend.  How about you?