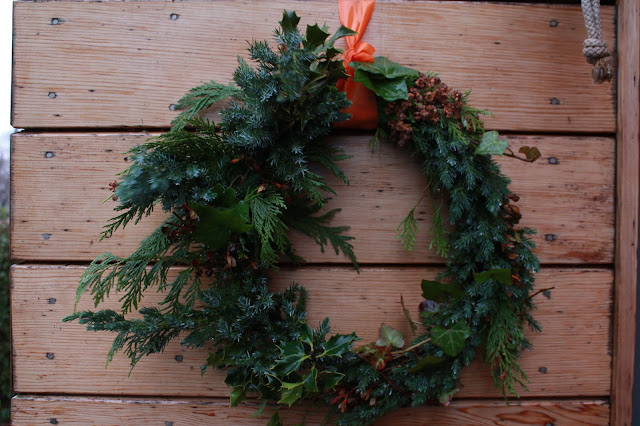 Every Monday we go to a friends house for a gathering of home educating families.  We like to spend as many of these outside and we manage it most weeks, amazingly, despite the fact that it can rain all the days in between, Mondays are usually dry and often sunny too.  I live in one of the wettest places in my country so rain and cloud are very common round here.  This Monday was no exception it was a beautiful sunny day, perfect for the activity we had planned.  We all walked back up to the barn where we held the Advent Spiral, pictured in my last post, to dismantle it and make use of the greenery.  It was colder in the barn than outside, so once we had packed away all the bits we headed to a table outside to make wreaths and table decorations.  I am no expert but I do like to have a go at these things, it is now hanging outside my front door, I just hope it copes with the high winds we have forecast this week.  It was even warm enough to have picnic lunch outside, it was wonderful to feel the sun on our faces.

It was St Nicholas Day last week, this is celebrated in many countries particularly in Europe.  It is thought that Father Christmas and Santa Claus derive from St Nicholas and the Dutch Sinterklaas respectively.  The day is celebrated in many different ways, often involving shoes being left out overnight and a small gift placed in them for the morning.  We baked some Speculaas inspired biscuits we don't have the special cutters and stamps that are traditionally used when making these.  We used our favourite biscuit recipe and added lemon rind, mixed spice and cinnamon to the mix.  Unfortunately I am unable to share a photo as I forgot to take one before they were all eaten, they didn't last long.  Our celebration was low key with a story, biscuits and a cup of tea in front of the fire. 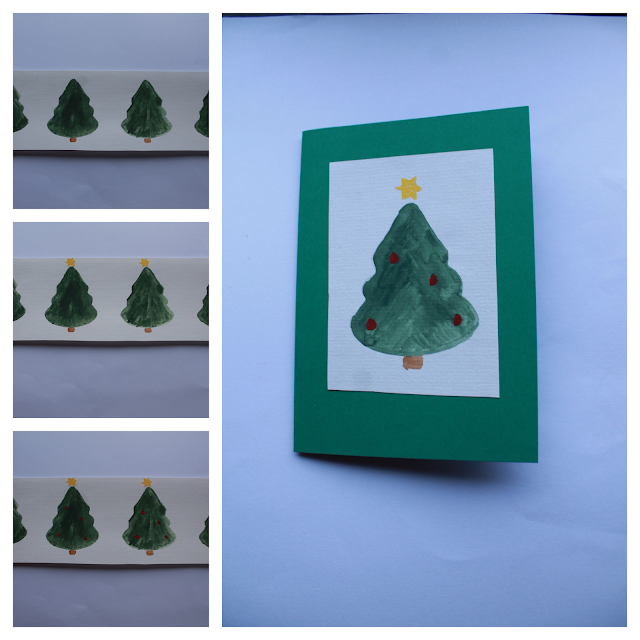 I prefer to make the Christmas cards I send out.  I have perfected the art of finding a simple design each year, anything too complicated gets a little tedious by the sixtieth card.  I don't want to make it into a chore, there is little point to it otherwise.  I have gone for a watercolour painting this year, drawing round a template, painting it and a dab of colours.  They are now all made and I am working my way through the list writing in them all, the international ones have already gone on their way.  I try and hand deliver as many as possible as the price of postage seems to go up so much each year, my husband travelled to my parents and his mums last week and I missed an opportunity to send several cards with him, oh well you can't get it right every time can you?

A local orchestra host a family concert in December each year, since I have known about it, we have had not been able to go partly because I forget to find out the date until too close to the time.  We finally made it this year.  One of the pieces they played had a solo violinist who was amazing, so talented, she played an encore a piece so technically difficult I don't know how she did it.  I realised that this was the first time that Alice has listened to an Orchestra playing live, she really enjoyed it and wants to go to more.  We are so lucky that even though we live in a rural area with venues that are few and far between there is a good choice of concerts throughout the year.  My husband is not a fan at all so I am so glad that I now have someone else in the family to join me. 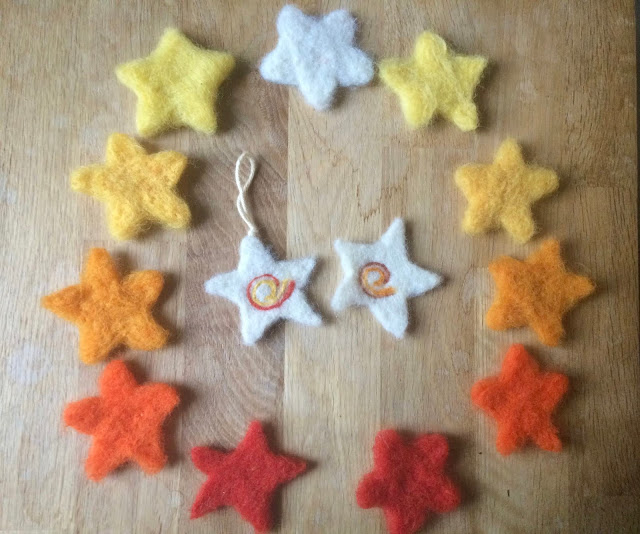 Alice and I had a go at needle felting for the first time last week.  I had recently bought some needles and wool to do this at our Monday gatherings I mentioned before, sadly due to illness we were unable to join in.  I had read about needle felting decorations using a biscuit cutter as a frame, that sounded, to me, like a good way to start.  So we dived right in and we are now hooked, Alice made the outer ring of stars, I made the two in the middle plus a set of smaller stars which I have strung together.  They were simple and satisfying to make, I think I might just have found a new craft to enjoy.

The forecast for today was for strong winds and heavy rain, for once it was right.  Poor Cameron got absolutely soaked doing his paper round.  We had one appointment this morning which we had to go out for, the rest of the day we have spent hunkered down at home with the fire lit.  It is meant to rain all day tomorrow as well which doesn't bode well for the very flooded field across the road from our house.  I hope that you have managed to stay safe and dry in what ever weather has been thrown at you today.